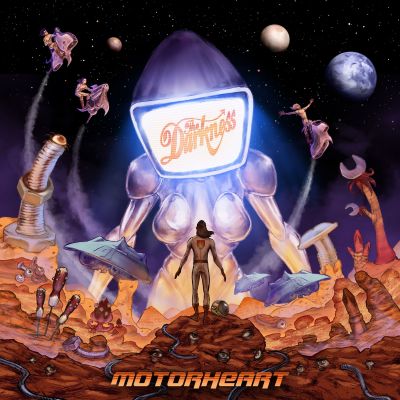 Dave Thomas checks out the new album from The Darkness for The Rock & Roll Circus. "Motorheart" is out on November 19th via Cooking Vinyl.

Its been over 18 years since The Darkness gave us their enormously successful debut album ‘Permission To Land’. Yes it has been 18 years since we were first graced with their now iconic single ‘I believe In A Thing Called Love’ and also the
Christmas No. 1 ‘Christmas Time (Don’t Let The Bells End)’. So, roll on nearly 20 years and lets see if these hard working lads have still got what it takes to make us sit up and listen with their 7th studio album ‘Motorheart’?

The Darkness, hmmmm they are just a little bit Marmite. Love them, oath them, they are different, but not in a bad way. Let’s talk about how their initial hits, that still respect a notable amount of airplay. They undoubtedly do write good songs, whether you like the super high vocals etc or not is the part that’s the matter of taste.

I am pleased to report that ‘Motorheart’ is a really good album from start to finish and well worth shelling out your hard earned to purchase. It’s definitely ‘The Darkness’ (which is nothing but a good thing and unavoidable with Justin’s vocals). It’s bursting full of well written songs and some great musicianship which is an area that I believe the Hawkins brothers deserve more praise than dare I say another band with brotherly guitarists that I don’t rate so highly as musicians (and yes, I did just that about Malcom & Angus).

However, I do have a minor issue with Motorheart. It’s not a gripe, nor a complaint in any shape or form. It wouldn’t stop me buying it, or in fact enjoying it.

I find it quite disjointed in a few places. Every track by its musicians screams at you that it’s The Darkness, but a few of these songs attempt to slip into the world of heavy metal
discord which is a step to far in my humble opinion from the rest of the more expected riff led rock that we’ve become accustomed to. I’m just left a bit dumbfounded by the time its over. It's oddly commendable as it showcases the variety of skills in both writing & musicianship that this band has, but before anyone starts pulling me up, I know all about black & white, Ying and Yang, Bill & Ted & even Bill & Ben before that. I know that you can’t have an album full of ‘the same’. But really??? I just don’t quite get the switch in ‘feel’ that some of the tracks have. Can you switch from AC/DC to Incubus ‘mid-song’ without thinking what’s that all about? Obviously, you can disagree!

Besides ‘my feelings on some of the production’, the album IS brilliant and a really strong offering from a much-revered band. If variety of is the spice of your life, grab a copy now!

The album is for sale now in a wide variety of formats, including standard and deluxe versions. Available both digitally and physically. There’s also a heavyweight black vinyl album, limited edition colour LPs, CDs and even an old-school cassette version. The guys also offer exclusive bundles and signed editions to boot.

"Motorheart" is available to order from the band’s Official Store