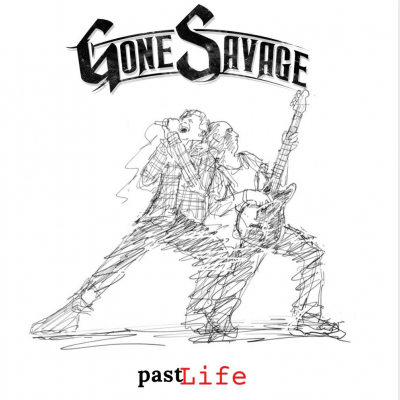 Jono Moulds checks out the new album "Past Life" from Gone Savage for The Rock & Roll Circus.

We would describe our music as Rock with a modern melodic feel, together with a hard edge and tight under belly! All tracks are accompanied by soaring melodies and up to 4-part harmonies.

The eerie sound of something like a crypt door opening and the haunting echo of footsteps walking along a cold, wet stone passage opens up ‘Regression’ as numerous effects can be heard throughout the journey of this introductory track. It resolves itself with the sound of telephone dial tone, as someone answers with an inquisitive ‘hello?’. Intriguing??

And so, onto the first ‘actual’ track on the album, which is ‘Icon of Today’ which has an almost ‘Queensrÿche’ musical bent to it from the word go. Given the likeness to ‘Geoff Tate and the gang’, now makes more sense in terms of the opening track (Regression), which certainly has that ‘conceptual’ feel to it. The ‘Rÿche’ vibe is certainly there from the songs musical style, but the vocal isa lot different to GT, which is more restrained and hits you at a lower register. All the same, it fits in amongst the song effectively enough. The guitar work, mid-way through the song, hits all the right marks, and has some lovely clarity and sustain to the solo. We end the track as we began it, with the sound of an engaged dial tone (I think??)

‘Irresistible’ starts off at some pace, as we get a barrage of ‘chuggage’ from the guitars, which has a menace to the sound, with a ton of gain and depth to the tone. The vocal line opens with ‘Save me and I’m drowning in you’ as we head at speed through the initial verses and onto the pre-chorus, which has an instant change of arrangement, as the guitars let those sticky chords ring out to allow the drums and bass to drive the song toward the chorus. The song then accelerates through the
chorus, as the drums find an alternative beat to keep things rhythmically interesting. A very simple, but effective guitar run gives more musical texture to the track on its descent to the finishing line.

A lone, palm-muted guitar riff and the first tones of the vocal set things off on ‘Life in Black and White’. All within the first minute of the song, you can certainly pick out that this tune has more of a commercial vibe to it, well, compared to what has come before at least. The chorus most definitely draws you in, while the guitar sound is equally as appealing, as there are some lovely exchanges throughout several sections of the track.

Another heavy guitar driven opening to ‘Permanent State of Change’, but this all that fades into the background as the verse kicks in and there is a much more measured and calmer approach, allowing the vocal to move much more to the front of the track. Verse two though sees the guitar join in with the fun as it plays out a dense guitar run, which locks everything back into more of a rock vibe. The guitar solo is played over the top of some understated musical support, which works an absolute treat, as they give enough space for the guitar to really flourish, which it does with some aplomb. Nicely done.

Up next is ‘Bulletproof’ which starts off with the more of that full on gain guitar, slowly ramping up in volume (akin to a motorcycle being revved up) all before some super heavy riffage (Metallica style) is placed in front of you, for your musical pleasure. The drums are also nicely placed in the mix and
support the heaviness of the guitar brilliantly. The vocal also feeds into the whole ‘metal’ sound of the start of the song, as it rips and burrows its way through the verse section. Strange then, that the song then lends itself in a different musical direction soon after, as keyboards come into the fray, which lightens things up a touch. That initial ‘heaviness’ returns though, as the bridge resolves and we hear the guitar firing on both cylinders, once again. The song has several sections to it, as we move from chorus through to the track’s outro, which once again, fully encompasses the bands efforts in making this the easily the hardest hitting tune so far on the album.

A slow and deliberate start to a ‘Life Incendiary’ as a chorus guitar plays a gentle, picked run over a subtle background synth, whilst the drums can just be picked out, keeping a hi-hat beat. This structure very quickly develops, as the synth and drums both emerge with slightly different, but equally suited changes in rhythm. This keeps its pattern and remains through the initial stages, but by the time we reach the pre-chorus, we have the addition of some overdriven guitar to give it some umph!! There are elements of ‘FM’ mixed with ‘The Manics’ within various stages of the tune, which is never a bad thing – not in my book, at least. This is the stand out track for me, up until this point.
What’s next???

‘Louder than the Sun’ comes in without any hesitation, as the skill and technique of the vocal harmonies within the group are given some time to show their wares. A slow and ponderous tempo, is supported by more hard-hitting guitar, but this subsides, to leave just drums, bass and vocal to fly the flag at the outset. As ‘Louder than the Sun’ is sung, there is a significant tip of the hat toward ‘Def Leppard’, especially in those vocal harmonies, but there are some guitar parts that could also fit into a ‘DL’ track or two. Another really interesting and well put together tune.

Full speed ahead as ‘Love Caught Me Out’ rips through my poor speakers, with more great sounding, heavy and ‘maple syrupy thick’ tone on the opening guitar intro. I also love how the guitar plays various lines and runs behind the opening vocal, keeping things really interesting. The chorus has another catchy, AOR (ish) vibe to it, and even with its commercial edge, the lead vocal (is it me or is it getting stronger by the track??) and sound is powerful and rocks along at a cracking, toe-tapping pace. The guitar break is out of the top drawer and is well worth the wait. Another really top track this.

‘Redemption Song’ has a phased guitar intro, which is well paced, but it’s soon overtaken, as the rest of the band find their own groove. As we enter the verse, the rhythm section changes pattern, where the bass ‘pulses’ out notes and the guitar hits those phased chords, which ring out. There are more glimpses of that top harmony vocal during the pre-chorus, as the lead vocal rises and primes us in readiness for the chorus, which maintains the same pace as the rest of the track. ‘Powerless’ has another strong guitar/riff opening to it, which starts off far more on the ‘rockier’ side of the tracks. This tune has a much harder exterior, especially during the chorus, where the drums drive the song even harder and with an increased pace, than it does during the verse sections. There is a harmonised guitar solo slotted in for good measure, which adds a nice touch to proceedings and gives something unexpected to the song’s vibe.

‘Touch your God’ is the final offering on the album, and starts with a light, chorus guitar, and some added bass/drum fills. A softer, slower song to complete the album, it has a great ambience to it and sets a mood that fits the title of the track. Vocals are certainly in the low register, for the most part, but yet again and to repeat myself, it just suits the song. This type of song is perfectly set for a solo to be placed over it to maximum effect and there is no disappointment here. A great song to end
with.

In summary then, the songs on ‘Past Life’ sway between ‘Conceptual Rock’ (if that’s an actual phrase/term??) and some more commercial ‘AOR’. Whether that’s a fair assessment, well, you guys will be the judge of that. In amongst this collection, is some fine song writing and playing. For me, the songs seem to grow in strength as we meander our way through the middle – end of this album, but that’s not to detract from the fist half of it – just my opinion. Really enjoyed checking this out.
Top songs – Top album.