The Rock & Roll Circus checks out the new KinStrife album. 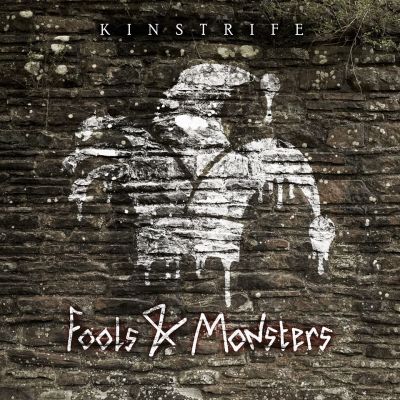 Lee Evans checks out the debut album from Kinstrife for The Rock & Roll Circus.

Fools and Monsters is the debut album from Hereford based heavy rock band Kinstrife, who were formed in 2013.

The twelve tracks on offer are made up of seven, which have previously been released as singles, and five new songs.

Right out of the blocks, the opening track “Intervention”, sets the tone for the rest of the album with it’s great opening riff and superb melodic vocals from Mike Hoskins, who for me personally is the ace in the pack throughout the entirety of this album. That is not to take anything away from the other three band members, with Alan Kaye providing some tasty melodic lead guitar work that always fits the song perfectly, while the rhythm section of bassist Dave Richards and drummer Simon Richards (not related by the way), lay down the groove and hold the whole band together as one solid workhorse of rock.

Second track in and “Make Me”, reminds me of the band Creed, with Mike’s vocals sounding uncannily like Scott Stapp. A catchy rocky tune with a superb chorus and a killer riff.

Next up is “Cursed”, which has an almost punk feel to the guitar riff and some crowd chant vocals chucked in for good measure.

Fourth song in, “Fear”, is the first of the lighter songs we get to hear and has a chorus you just won’t be able to get out of your head and again some killer vocals. For me Kinstrife really excel on the slower songs, which includes “Unconditional”, the longest song on the album that clocks in at over six and a half minutes!, and the awesome “Slow and Easy”. These three beauties are my favourites by the band. Just pure class!.

The heavier tracks like “Devil’s Call”,  “Rise and Fall”, “Get Away” and “Bombs”, really get you bouncing and borders on metal at times with the guitar work on “Any Given Day” having a heavy Iron Maiden influence. Fools and Monsters comes to a close with the hard rocker “Stick With Me”.

This whole piece of music really has everything you would want from a rock band on top of their game. Something for everyone for sure and an impressive debut from a band I have high hopes for. Check it out, you won’t be disappointed.

We hope you enjoy this album of 12 songs as much as we do and we cannot tell you how much we want to get out and play these songs again. We wanted to be having one hell of a party to release this album but like so many events/celebrations we will do this at a later date.

Alan Kaye :- "This was a long time coming, but we all knew we had it in us to make this something to be proud of!"

"All we wanted, was to say we had made & released an album!"

You can buy this album through our shop or by contacting one of the band, you can listen on Spotify, itunes, amazon, soundcloud etc.