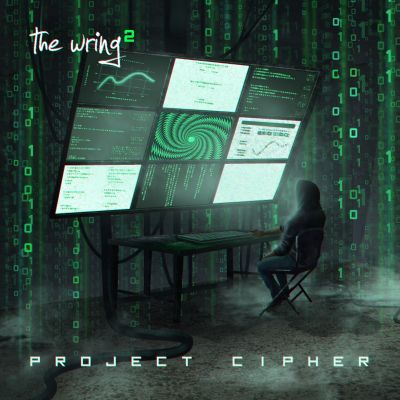 The Wring is a progressive rock project created by guitarist Don De Wulfin 2015. The first album employed the services of local musicians and toured with the likes of Anvil, Diamond Head and The Dead Daisies.

The Wring² Project Cipher is the second album by De Wulf but this time around he has gathered together a very impressive group of guest musicians to bring the music to life.

Guitarist Jason Sadites rounds out the line-up, playing a killer solo on one track. If I was to provide a comparison to other bands then I would have to mention that the whole album definitely has a big Kings X, Dream Theater, Tool and classic Rush feel to it. Enough proggy stuff for anyone who loves odd time signatures and the complex stuff, but still plenty of melodies and rock riffery for the regular heavy music listener with lyrical themes full of emotion and aggression.

Of the seven tracks on offer six have vocals and one is an instrumental.

First track The Light kicks the album off in fine style with some
incredible drumming from Lang and superb vocals from Bonilla. The bass playing from Beller has a real Geddy Lee vibe to it and the guitar riff is a blinder.

This is pretty much the theme running through the whole album with tracks like Touch which has some great backing vocals and a great chorus and Dissension which is the heaviest track on the album. What a fantastic heavy guitar riff and an awesome solo from guest guitarist Sadites. Definitely one for the headbangers and fans of a good old metal
tune. Awesome stuff.

Dose which is the penultimate track on the album is another song with a great chorus and has a real uplifting feel to it and a quirky riff which encourages the listener to get those feet tapping. The guitar solo from DeWulf is very reminiscent of the great Alex Lifeson from Rush. Cracking song.

Steelier is a belter of a track with the vocals giving the song a very Kings X style to it along with more impressive backing vocals. Just brilliant from start to finish.

The instrumental Cipher is where all the musicians really get to stretch their legs and show us what they are capable of. Stunning. It’s breath taking stuff and a song that Dream Theater would be proud of. There are some guitar parts in this one that have an almost classical theme to it.

I left Sorceress until last as its my favourite song on the album. The guitar riff is so damn catchy, the vocals are top notch, the drum and bass playing is as good as you will hear on any piece of music. One of the best tunes I have heard in 2021. Love it.

The Wring²  Project Cipher has really blown me away with it’s brilliance. Great song writing, phenomenal musicianship and no keyboards or synths which I can hear of which is very unusual for this style of music.

It’s proggy, heavy as hell in parts, catchy and just a joy to listen to.“I love the complexity and innovation of prog-rock but also the hooks and brevity of great classic rock… The Wring tries to bring you both. Don Dewulf’s words not mine but sums this magnificent piece of music up perfectly.

In contention for album of the year for me, so go and check it out.