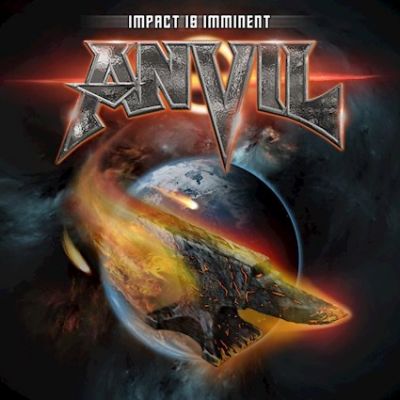 Jono Moulds checks out the new single from Anvil for The Rock & roll Circus. ‘Take a lesson’, out now on AFM Records, taken from the new album 'Impact Is Imminent' out on 20th May.

And so, this week’s review brings me onto the brand-new single from Anvil - ‘Take a lesson’, which commences with somebody ‘channel surfing’ through a few TV stations, until we arrive at a voice (Dave Grohl perchance??), who has the undiluted and pure pleasure of announcing ‘a great Rock ‘n Roll band – ANVIL!!!’ And who can blame him, as we have all seen what trials and tribulations this time served legendary band have gone through, only to come out the other side and still have the dignity, energy, and chops to deliver metal mayhem!!!

The tune starts up, with the classic ‘hi-hat’ count-in, before that saturated, high gain chord progression eases its way in. ‘Robertson’ comes in hard on the bass, with a great run, while ‘Reiner’ delivers consummately, as the drums quickly follow, making sure that the song is rooted firmly in place with some serious force. After this, the tune starts to seriously accelerate, as the drum pattern finally settles into position and the ‘sharpness’ of the guitar hook is brought to the front of the mix. As bombastic and pounding as this opening onslaught is, an additional guitar lead is added, which elevates it into another ‘Metal Plane’

Things are brought down to a ‘heavy stomp’, as we hit the first verse, where guitars chug (all thick, raspy, and phlegmy), drums and bass follow suit, as we finally welcome in the dulcet tonal qualities of ‘Kudlow’, as he unleashes his first line ‘Try to keep yourself from being led astray Ignore the stupid things that people say’

At this stage of proceedings, it must be said, that as much I as admire bands/artists re-inventing themselves by trying out new angles/sounds to develop songs, there is another part of me that gravitates towards groups maintaining a style and philosophy, by simply exploring avenues that they have strode since day one of their career, and who work within these narrow boundaries, regardless of trends and influence (AC/DC being a prime example).

The further into the song we travel (lyrically, that is), the more you can align the tune’s theme/meaning back to the classic and career restoring documentary that was made (The Story of Anvil). The angst, pain and ultimate redemption all appears to feed into the words that are ‘spat’ out. This is epitomised within a section of the lyrics that I picked out – ‘Never giving up is what they always say, they never had to work for a single day, Backseat driving on an easy street, The competition you must defeat, Vision that's clear, long career, look in the mirror’ – see what I mean.

We have another batch of verse/chorus before a bridge section is fed in, which comprises of a series of palm-muted guitar chords being picked through a phaser that heralds the tunes guitar showpiece. The initial war-like beat and stomp arrangement (created by ‘Reiner’) is quickly dispensed of as double bass pedals are called into action, that creates a madness all its own, which pushes said solo onto a faster sounding trajectory, and comes to an almighty crescendo that is further compounded by some craziness on the snare drum.

Whether you’re an Anvil fan or not, you’d be hard pushed not ‘doff your cap’ and fully admire the band’s tenacity and resilience to get through those ‘tough times’ Thankfully, they’ve come out the other side and proceeded to re-ignite their career and continue doing what they love most. Rocking hard, believing in their metal madness, and continuing to play live for fans around the world. For me, this song is their war cry and tells that tale. Anvil – I salute you!!!!

Check out the official video here :-