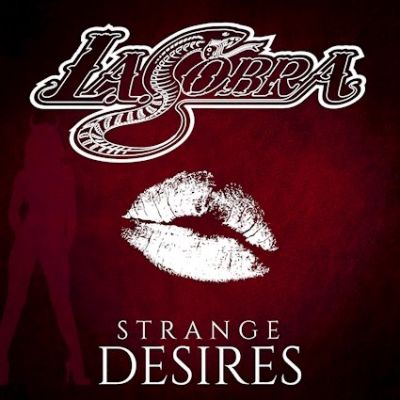 Jono Moulds checks out the new L.A. COBRA single for The Rock & Roll Circus. The new single 'Strange Desires' is released on 10th May, out on Crusader Records.

A simple and repetitive guitar riff is the driving force to ‘Strange Desires’, as the bass slides in and holds on a note, whilst a secondary guitar adds some support. This riff lingers for a spell, as this opening pattern is only broken when ‘Cobra’ starts with the opening line and ‘Callie the Animal’ kicks in with a solid groove, made up of a kick drum and floor tom beat.

The verse section is made up primarily from the singles opening, that is, the predominant melody of the riff and the vocal line that’s sung over the top of it, however, there is a change afoot, as a flurry on the double kick-drum pedal leads us into a kind of bridge segment, where there is a change of musical direction. Gone is the opening riff and is now replaced by another, where I’m getting an echo ‘Ghost’ about the feel of the vocal melody line.

After this, there is a short burst of guitar chords, that act as a conduit to return to the guitar riff and we are onto the second verse (which is a longer piece than that of the opening), before we hit that bridge section for a second time.

'Strange Desires' is the second single off the 2022 L.A. Cobra album titled 'Superstition'. The song encourages the sharing of the “often” secretive desires and fantasies that are kept secret from a lover. The song features a unique yet catchy chorus that takes inspiration from bands like Queen and ABBA yet still features the rough edge of these South African sleaze rockers. The song ft. Slade Sleaze - L.A. Cobra guitarist, on vocals in the verses. The album 'Superstition' is set for release later in 2022.

As we come out of the bridge, there is an augmented section, where the riff is played, but some well-placed additional guitar is played over the top of it, that increases and solidifies the passage. This is a shrewd change of a direction, especially as this is all building up to the song’s guitar solo, which comes at you strongly, it’s not so overplayed that you miss how it has been developed to fit into the song, rather than being lost in amongst a million played notes.

As the solo fades out, we have another burst of the opening riff, which is brief, as we soon build to the songs end with an extended bridge section, until we finish the tune with an outro that is centred around what we heard at the starting point, the guitar riff driving forward.

All in all, what we have here is a song that is fundamentally broken down into two sections but is ultimately dominated by the guitar riff. Some would say that the song is too simplistic (given that it doesn’t deviate away from the basic riff), but how many great songs have been born out of very simple riffs?? There is no doubt that there is enough of a hook in the track that makes this commercially viable, and a great choice as a single. I think this is a great rock radio tune and one which will go down well with rock fans everywhere.