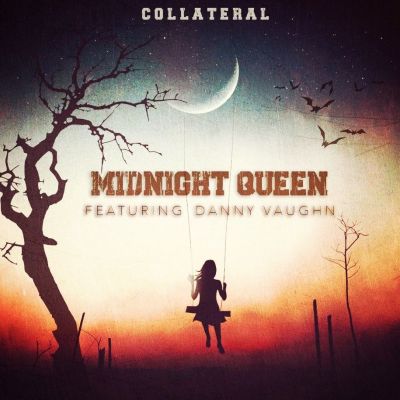 British six-piece rock band Collateral formed in 2018. The past few years have seen them overcome obstacles and work hard to travel the road to success and their show-stealing performances, they are here to prove they mean business. The six players come from backgrounds in 80s rock, country music, Southern rock, and metal, which makes for a strong and varied original sound.

The sound of ‘Country Rock’ comes drifting out of my speakers as I check out the brand-new single from ‘Collateral’, that being, ‘Midnight Queen’. The new single also features ‘Danny Vaughn’ from Tyketto sharing lead vocal along with singer ‘Angelo Tristan’, and as Tristan explains “Tyketto was one of my inspirations growing up," says Angelo. "To have Danny on one of our tracks is unbelievable. When one of your idols says how great your track is, it makes you feel like you're doing something right. I can't wait for all the Tyketto fans to hear it.”

“I was overwhelmed when Danny said that he wanted to be part of this,” says Collateral’s lead guitarist Todd Winger. “One of the all-time legendary rock voices digging our tunes, let alone  wanting to join us on one is inspiring beyond belief! He is one of the nicest guys in the business. Thank you, Danny.”

A single, strummed acoustic guitar chord introduces the new ‘45’ (they’re still referred to as a ‘45’, right?) as the crisp single shot of the snare drum serves as a rally cry for the rest of the band to join the party. As stated, the sound of this song from the beginning, leans toward classic Country Rock, but the vibe/intro quickly dissolves as we head into the first verse.

It’s at this point that the bass and drums take centre stage, as the opening lines are sung over the top of the main rhythm section, as they do their ‘thang’, ‘Standing on the edge of a broken heart’ (hey, we’ve all been there!!). The bass/drums and vocal maintain this arrangement until one single guitar chord is hit, and then we are off and into the prolonged chorus, which, is immediately likeable and has that ‘current era’ ‘Bon Jovi’ style about it.

Straight after the chorus, verse two kicks in, but this time, there is the added support of some light guitar and piano that flashes a little more ‘colour’ to this section of the song. There is a pre-chorus (I think?) that soon follows, which contains some great vocal from ‘Vaughn’, where his driving voice flits in and out and certainly raises the bar. This is a pre-cursor of what’s to come next.

Vaughn then vocally takes control of the bridge section, as he begs the question ‘what you doing to me?’- ‘You’ve been up all night, thinking about how this life should be’ as he relinquishes his singing duties to allow for the guitar to revel in a tuneful and well-structured guitar solo.

Before we head into the final stretch of this single, there’s time enough for an abridged chorus, that once again, is left solely to vocal, drums and bass before everyone’s back in and its off we go again, but this time, there’s a little more ‘Rock’ than ‘Country’ to be heard, as the vocal ramps up, to give it a rousing finale.

This is a fine example of mixing two musical styles to make one extremely commercial and enjoyable sounding tune. The addition of Vaughn onto the track certainly gives it some added dimension and lifts the song in all the right places. Great single and a pleasure to check out!!