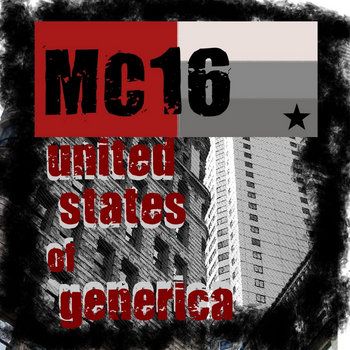 Jono Moulds checks out the new single from MC16 for The Rock & Roll Circus.

Fresh off the back of a busy summer of gigs including HRH Punk and the HRH Awards, MC16 release ‘United States of Generica”, the follow up single to last year’s ‘Anti’ which premiered at the
Rebellion virtual Festival.

Once again the band went into the studio with producer Dave Draper in between his album sessions with The Wildhearts and The Professionals and have teamed up again with director Will Hutchinson (the horror film Overhill) for the video.

An opening roll of a dampened sounding snare introduces the new single by MC16, which is ‘United States of Generica’. The strange title and background to the song is succinctly revealed by the band’s drummer ‘Duffy’. He says, “On ‘United States of Generica’, which follows on from last year’s ‘Anti’, the trio cast a jaundiced eye on the blending of high streets up and down the UK throughout the past couple of decades, as independent businesses are forced out by grasping landlords and faceless
chains…

“I used to think I was psychic” says drummer Duffy. “I could be in any city centre for the veryfirst time and know where all the shops were. But then I realised that all the city centres are all just generic. I am not psychic. Pah!”

“High streets have just become memories now’ says bassist and co-vocalist Quinn ‘I remember some of the great characters of our high street like the man who was always dressed as a cowboy shopping with his Mum, and the busker with only one string on his guitar. Now its just a middle ground of mediocrity!”

You can’t just blame the death of the high street on the internet” adds Carson, guitarist and co-vocalist. “High streets are very product focused but me personally, I don’t buy a new brand label t-shirt every week but I would be more of a user if they were more service or experience focused and built on need not gain”

As the drum roll continues and develops, the bass then joins rank to add some more depth and breadth, before the ‘choppy’ guitar enters, as we instantly have a Dr Feelgood – ‘Roxette’ vibe taking place (love that song).

The opening verse very quickly switches from the intro feel to a full on ‘Cockney Punk Rock’ vibe, as the initial lyrics are sung over the top of a repetitive bass line and drums. The vocals are harsh and gritty (well, there is a serious edge to this tune) as the opening lines strain out ‘Why don’t you say nuffing to me – I give you my opinion to the enfth degree’ (sorry about the literacy change here, but I wanted you to get a real feel for the ferocity of the vocal is expressed)

Another ‘flash’ of that opening guitar line is sandwiched between verses one and two, before we crash headlong into the chorus as the tunes title comes flailing out ‘This is United States of Generica’.

The mid-section of the song follows the same pattern as the opening two verses, and lyrically, there is still enough angst coming out from the band to show their distaste and distrust of what’s eating into their local community, that is, in terms of the tracks content and meaning, as their area/community loses all character from what they knew growing up.

I swear that the second chorus is sung even more passionately and powerfully than the first (or is this just me connecting to the song too much??).

A bridge section kicks in two-thirds of the way through, which has an almost reggae feel to it. This plays out from this point until the end of the track where the guitar plays overdriven/ choppy chords that sit behind more lyrical fuel and rage. There is some well-placed support vocal that adds some extra value-add (a la The Clash) as we head toward the final stages.

As clearly pointed out above, this single clearly outlines its intent from the off. The band see the demise of the institutions and landscape that they grew up in and around. They see it becoming just another replica of towns the length and breadth of the Country and have used their forceful style of music as a perfect vehicle to vent their frustration.

The song has all the classic hallmarks of punk rock songs from the great days of the mid to late 70’s. If that’s your thing, go check out this passionate and powerful tune.

The track will be available on all digital streaming services and via the band’s Bandcamp - Band Facebook Page.

Check out the video for "United States of Generica" here now.