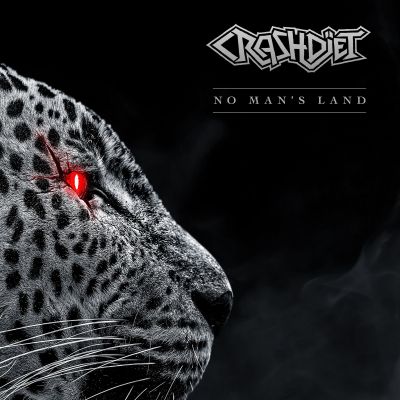 Jono Moulds checks out the new single from CRASHDÏET for The Rock & Roll Circus. The single 'No Man's Land' is out on 19th November, on Crusader Records.

CRASHDÏET are one of the biggest names in the glam metal/sleaze rock scene and the band recently signed to global rock powerhouse label Golden Robot Records. CRASHDÏET are back in the studio working on their 6th studio album, due out early 2022. They are set to deliver a taste of what’s to come with their upcoming single ‘No Man’s Land’ which will be released digitally on the 19th of November.

‘No Man’s Land’ is the first single from CRASHDÏET’s new studio album, which will be their first since 2019’s Rust. The single is sung with powerful and precise vocals, surrounded by thick driving bass, heavy guitar chops, rock-solid drums and scintillating production. ‘No Man’s Land’ is a story about  looking inwards and moving forward, no matter the cost. ‘No Man’s Land’ sees the band on top of their game and once again proving Sweden as a world leader in this genre.

With the motto “go big or stay home” Crashdïet formed in Stockholm back in the year 2000 and brought in the new millennium with full-throttle speed and excess. Crashdïet released their critically acclaimed debut album Rest in Sleaze in 2005, giving them a spring of success in their home country
of Sweden and abroad. Shortly after, their frontman Dave Lepard was found dead at his home, the result of a tragic suicide in January 2006.

With a career littered with abuse, tragic deaths and line-up changes, it nearly ended the band more than once, but the band have become known for picking up the pieces and returning to the scene of the crime… every time. The surviving band members and new blood have carried the glam-metal
sleaze-rock torch ever since, touring the world and releasing many acclaimed studio albums.

The distant strains of the main lick slowly rising and easing its way in, as we are formally introduced to Crashdïet’s single ‘No Man's Land’. With the introductions now completed, let’s check out this new single. As detailed above, Crashdïet fall into the ‘glam metal/sleaze genre’, but from the outset, and for me, the sound/vibe of the single leans more towards a classic rock tune rather than their sleaze/glam image portrays. But it works sooo well!!

After the introduction ebbs away, this tune powerfully drives forward. There’s absolutely no holding back, as the band, armed with the opening riff, (but now with a harder and overdriven edge to it),‘clatters’ through its introductory. There is a subtle, but nicely placed change of chord played behind the main riff that gives it a lift, before we head straight into the first verse. The guitar sound is prominent and has some serious depth, both in tone and gain. Lovely stuff!!!

The initial verse has that classic descending chord structure/arrangement to it, and it’s at this point where ‘Keyes’ starts the business of showing off his vocal wares. Immediately, the vocal is impressive. There’s power and melody (which is a pretty decent and effective mixture to have in your vocal arsenal) as he launches in with the inaugural lines of the track - ‘Let it be said, it’s the sign of the times and the ways’. Behind the vocal, the guitar ‘chuggs’ away and there’s a faint and distant underlying lick being played, which fills it in really well.

The chorus then ‘slams’ in, and to my untrained ear, even more layers of guitar are added, along with some excellent backing/supporting vocal, just to ensure that the power is intensified, at those specific points. It has to be said that both the verse and chorus are instantly likeable, and this single
has a really cool commercial vibe to it.

There is a change of tact at the mid-point, where ‘Young’ throws in a bout of drum rolls as we head to an intervention, where there is a change of key and build up, before the guitar takes over. Firstly, there is a riff run that leads nicely into the solo piece. This is harmonious and has great melody.

One more verse and a final chorus and we are all but done, but not before we end the song in exactly the same as we started it, that being, the distant strains of the main lick slowly fading on the outro.

The band have certainly had their ups and downs throughout their career, but they remain resolute and refuse to back down. This single is my first time checking these boys out, and I’ve been more than a little surprised by its vibe, power and the musical ability the band obviously possess.

The song has all the right elements to grab people’s attention and hopefully, throw them under the spotlight. Give this a spin. Its more than worth 5 minutes of your time.