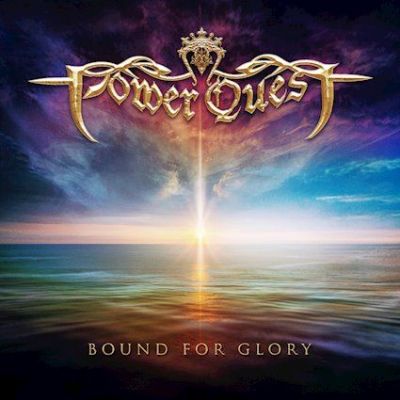 Jono Moulds checks out the brand new digital single from Power Quest, for The Rock & Roll Circus. "Bound for Glory" was released via Inner Wound Recordings.

UK Power Metal band from Southampton, formed by keyboardist Steve Williams in March 2001. Their style is a combination of 80's influenced Heavy Metal with bombastic guitar riffs, fast solos, melodic keyboards, and uplifting catchy vocals that makes their live shows an astonishing and unique blend of energy and sheer awesomeness that is captivating to behold.

Steve Williams of Power Quest comments on the new single- "'Bound for Glory' was written during lockdown and lyrically it is very much inspired by the memory of my dear friend Paul Finnie who passed away just over 2 years ago now. Musically it's the first song we have written remotely as the band haven't been in the same room since Nov 2019 and I'm really thrilled how it's turned out. I hope you guys enjoy it too!"

An unusual and rare treat for me, as I’ve been kindly asked to review the new single from ‘Power Quest’, that being, ‘Bound for Glory’.

As it states within the introductory notes, this song was written during the lockdown and is heavily influenced by the passing of close friend of the band, so there is more than just a little emotional attachment with the song. With that in mind, it must have been a labour of love and more than a fair share of pressure to ensure that track was not only musically fitting, but also, that the lyrics where poignant to the memory of someone so close. Having played the song, there is no doubt that it more than surpasses both of these important factors (bravo chaps).

So, let’s get into it. From the off, we are met with a vocal array of harmonies that state ‘Far beyond this world, far beyond this night – Far beyond this Universe and far beyond this life’. This almost heavenly host of angelic voices quickly fades as the immediate impact of ‘Smith’s’ thunderous double pedal kick drum floors you. More harmonies, but this time by the guitar, plays the main melody, which has a Regal/Patriotic feel to it, all before we arrive at the first verse.

‘Edison’s’ opening gambit reveals ‘When it all comes down to life, welcome to the danger zone’, setting the stall out from the off. It’s apparent that the lyrics re-emphasise to take life by the scruff of the neck and enjoy the ride, as you just never know what’s in store. Wise words indeed.

Musically, the song is super-fast and high-octane stuff, however, it has some awesome melody lines throughout and for a track that has enough pace to it that it would be far too quick to set off a speed camera, it’s highly tuneful.

I really like the key change that leads into the solo - it sets it up perfectly. The solo, has two main segments, the first, has ‘Williams’ shredding away, adding more melody into a song, that already has it spades. The second, sees some great guitar harmonises as he starts playing scales that must have caused some serious scorch marks on the guitar neck.

Not to be outdone, and straight after the guitar solo section, ‘Williams’ provides a synth piece, that once again fits nicely into the arrangement.

There is another chorus before to look forward to, before the final crescendo, where as a unit, the band drive through key changes to reach the tunes Zenith. This is where ‘Edison’ hits his range as that final vocal is sung in perfect pitch to the finishing notes.

As stated, and after having had this track pushing some quality air out of my speakers, this is far and away a fitting tribute to a friend, both musically and lyrically. Not just that, but the song is full of power, pace, melody and craft.

And if you don’t mind me saying boys, I’m sure he would have been proud and thrilled with the honour on which you have bestowed him.