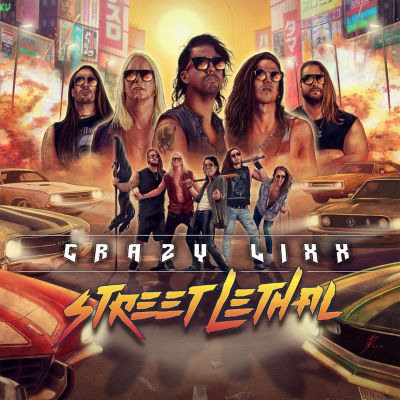 Jono Moulds checks out the new album from Crazy Lixx for The Rock & Roll Circus. "Street Lethal" was released on November 5th 2021 on Frontiers Music s.r.l.

Swedish Hard Rock / Hair Metal band Crazy Lixx carries the torch of Rock ‘n’ Roll with pride. Since their album debut in 2007, the band has been enthralling crowds with their unique brand of 80’s Hard Rock. Noted as one of the last standing bands of ‘The New Wave of Swedish Sleaze’, Crazy Lixx are pioneers of Sweden’s rock music scene in their own right.

And so, Frontiers Music Srl is proud to announce the forthcoming release of Swedish hard rockers Crazy Lixx's new album, "Street Lethal". Chock full of huge choruses, memorable hooks and riffs, and wailing, emotive guitar solos, fans of the band will be thrilled and delighted by what is on offer here.

‘Enter The Dojo’ is a short musical piece that starts off like something you would hear out of ‘The Water Margin’ (if anyone can remember that cult TV series from the ’70s), but then transcends into layers of synth as we lose the ‘Japanese flavour’ altogether. This dovetails into ‘Rise Above’, which comes a-rollicking into life. ‘Cirera’ launches drum rolls galore, like they are going out of fashion, quickly followed by the first blast of guitar riffage, that ends with a classic whammy bar ‘dive bomb’
as we fly into the first verse. Immediately, ‘Rexon’s’ vocals are mightily impressive, which show that he has all the main elements that a classic rock singer should possess. There is power, melody and some top range to his voice. A lovely change of pace within the pre-chorus, sets up the chorus to a tee. There is some tremendous supporting vocal on offer too, as the band back up their lead singer to the hilt. On top of this, there is some incredible guitar solo work, thus making this opening tune a
winner from the off.

A ‘Skid Row – Youth gone wild’ vibe to the start of ‘Anthem for America’, as the band kick this one off as one, that is, loud, heavy and direct. The opening guitar lick is highly prominent and runs the same vocal melody line; as the chorus is sung, as ‘Rexon’ delivers - ‘From the West Coast waters to the New York Streets, here it calling me!!’ The chorus is big and ballsy which will entice and draw in the most sceptical critic – very catchy. There’s another cleverly placed part, where the chorus is briefly sung as ‘Cirera’ changes to a staggered-crash beat, which will easily give licence to the crowd raising their hands and joining in at this point. Great tune.

A choral and harmonised vocal opens up ‘The Power’ with only drums for support, until there is some classic 80’s hair metal style guitaring, one playing the main riff and the other, just dipping under the radar, but adding some frills. Riffs and more chanting type vocals are on offer during the verse section (there’s more than a likeness here to some classic Leppard, especially with the production on the compressed support vocal – very good chaps). The pre-chorus adds more ‘Leppard-esque’ saturation to the tune, before we get the chorus, which yet again, has an instant appeal, helped once more by a nice change of drum pattern, which allows the song to take on an anthemic quality. This is another great track – loving this so far.

A guitar run (akin to something Neal Schon from Journey would muster – now that’s good) has us welcoming in ‘Reach Out’. The beginning to this has a lovely balance between FM/Journey (take your pick or, just take both). This has much more of an AOR/Commercial feel to it than the tracks reviewed so far. The band leave enough musical space within the verses to allow ‘Rexon’ to demonstrate what an excellent vocalist he is. The chorus is fully laden with silky layered vocals and a great hook, which is really uplifting, helped along the way by the band finishing the pre-chorus on a minor chord and then unleashing a big smacker of a Major C chord for the opening of the chorus.
Tasty indeed. But there’s more. More structure changes abound during the second chorus section, as ‘Reach Out’ is then sung over a minor chord. Great arrangement. If you are a fan of classic AOR, look no further.

‘Final Fury’ starts with some bass synth lines, accompanied by a smidge of electronic percussion, that settles into background. From here, there is some fleeting backing-track of two people (Police channel??) talking over a radio system, before the guitar takes centre stage with a beautiful solo piece that runs for the entire length of the song, which, is just over two minutes in total. Short, but definitely sweet. A nice break of pace. Talking of pace, and to the title track we arrive, that being ‘Street Lethal’ which is next in the queue and this is off like a bullet from a gun. A speedy guitar riff whips the intro into shape, as we get to the opening verse. There is more of that Police radio conversational patter (as we noted on the last track – are they connected?? You can make your mind up on that). This track has a much harder edge to it, as opposed to those strong, initial AOR tunes, which again shows the diversity that the band have and how they can mix and match win in what they write.

The intriguing title of ‘Caught between the Rock n' Roll’ is up next. So, things start off with an almost ‘Cowboy Rock’ vibe (think Blaze of Glory by Jon Bon Jovi), that is until, that polished guitar soundcomes back in and takes charge once more, playing the main melody line and hinting at what’s to come. The verse runs smoothly enough, and nicely sets up the ‘crowd chanting’ chorus, which is another winner. The guitar solo is played over a great change of chord pattern, which ‘Rexon’ helps deliver (vocally) by following the melody change itself. The outro is predominately the chorus on repeat, but keep a close ear open for ‘Rexon’s’ vocal range, I’ve said it once, and I’ll say it again –
Impressive. Along with that, the band go back to the ‘Cowboy Rock’ vibe to run down the track, but this time, it seems to last a little longer, and I for one wished they’d kept this going, rather than fading out. Sounded great.

‘In The Middle of Nothing’ is a ‘semi-ballad’ affair (is semi-ballad an actual term?? Answers on a postcard please!!) which is a mid-paced tune, which has some subtle flavours of both Bon Jovi and Def Leppard within the song’s ingredients. Drums kick of the introduction, as the keyboard gives us a clue of the main melody line that’s about to arrive further along. ‘Through the ups and downs – good times and bad’ as we shift gears through the first verse. As predicted, the chorus follows the opening
melody, with some nice background guitar licks to glue it all together. The chorus is impactful and plays out as another prime example of classic AOR. There’s even time for a key change toward the end, where they go up a step (or two) in time honoured fashion.

And onto ‘One Fire - One Goal’ which again starts off with an awesome and catchy lick, which this time is executed on the guitar, but backed up nicely with keyboard to give it a well layered beginning. The verses; musically, are slightly diluted in comparison, but I’m sure this will have been arranged to ensure the chorus bursts through – which it does indeed and then some. This really is a great piece of melodic, fast paced Rock!!! There is even more impressive support vocal throughout and the solo engages; as it sounds like it ‘flits’ between the bridge and then neck pick-ups on the guitar, giving it that beautiful rounded tone. Top, top song.

By some distance, the longest tune on the album, ‘Thief in the Night’ is the final track coming in at a whopping 7.25. The track kicks off slowly, with some heavily induced WAH effect on the guitar piece, all before we hear the main lick (via the guitar, once again), which and without repeating myself, has a great hook (you just can’t be helped being drawn into these songs from the off – bravo chaps). The verses also have an instant likability and its off we go, as you know that this is going to be another
slab of great music. ‘Rexon’s’ vocal remains in a low register through the early stages, but by the time the chorus comes along, we are back to normal. There is also time enough for a bridged section that brings things on the ‘down low’, before the guitar solo kicks things back off once more, and in some style too, as it plays out for what seems a ‘Freebird’ length of time. A great track to finish of this mighty impressive album.

How to sum up then? Well, an 11-track album that’s jam packed with some great AOR/Melodic Rock tunes, of that there is little doubt. Influences aside, the band have ‘locked-in’ to a style of music for everyone to plainly see, however, there is a lot more to this than just that.

Song writing is top notch. These songs could have easily been plucked out of the 80’s and been held up against the flag bearing bands of that time (you know who they are). The band have all the technical attributes required to support and carry these tunes with some ease. ‘Rexon’s’ vocal is sublime and adds that extra sparkle and magic to each track.

This has been an easy album to review, for the reasons detailed above, so if you want a large piece of AOR to fill your head with, then look no further than Crazy Lixx. You will not be disappointed.