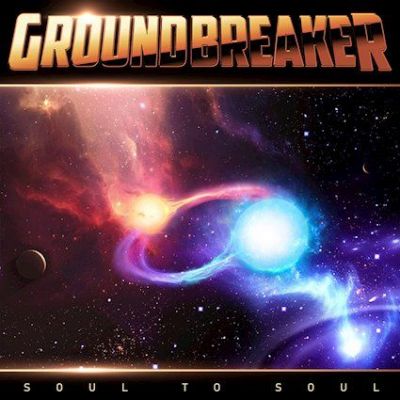 Dave Thomas checks out the new album from Groundbreaker for The Rock & Roll Circus. "Soul to Soul" is out on Frontiers Music srl.

This is the second album penned under the title of ‘Groundbreaker’, featuring a collaborative writing process and topflight musicians that once again centres around the incredible vocals of Steve Overland. After a brilliant debut album, the second offering ‘Soul to Soul’ is an absolute stonker that demands checking out for sure. This time around assisting Overland with writing we are duly blessed with Stefano Lionetti (Lionville), Pete Alpenborg (Arctic Rain), Jan Akesson (Infinite & Devine), and Kristian Fyhr (Seventh Crystal), and with the tracks solidly laid down by Sven Larsson (ex-Street Talk) on guitars, Nalley Pahlsson (Therion) on bass, Herman Furin (Work Of Art) on drums, and Alessandro Del Vecchio on keyboards.

Before we go any further, for those that have not heard of Steve Overland you have really missed out. The man must be close to holding some sort of world record for album releases/appearances. He is the singer behind one of the UK’s finest export ‘FM’ that harp back to the big hair AOR days of the 80’s (and that still churn out superb stuff), but…….Steve has also featured on albums with Wildlife, Cerrone, Alan Parsons, Asia, Radioactive, Robert Hart, plus a whole heap of others. He has also headed collaborative albums under the names of SO!, The Ladder, Shadowman, Overland, Ozone & Lonerider. Discogs has ‘the Voice’ currently appearing in no less than 88 albums. Yes, that’s not a typo, I’ll spell it out for you. Eighty-eight…WOW!

So, to the album. In one word ‘sublime’ and with production that’s slicker than your best Teflon coated frying pan (other coatings are available). Inside is a whole heap of modern/fresh hook laden rock tracks that have been incredibly topped off with Overland’s vocal acrobatics (that are sounding better than ever). Mega catchy, foot tapping lushness that’ll have you nodding your head in appreciation and singing along in no time. Alternatively jump into your sports car, turn the music right up and drive like a loon with the biggest grin on your face (you get the idea).

Seriously, this is one utterly awesome album from start to finish (which comes all to soon). If AOR big choruses aren’t ‘your thing’ you still gotta check out this monster purely for the
musicianship and of course the incredible vocals that are simply Steve Overland. It’s a masterclass in every aspect.

If I had to pigeonhole it, which I never like doing, think melody clad heavy AOR with a more than generous sprinkling of modern inspirations.

Grab yourself a copy. It’s off the scale for any rock lover.