The Rock & Roll Circus returns to The Dolls House for Dollfest 6. 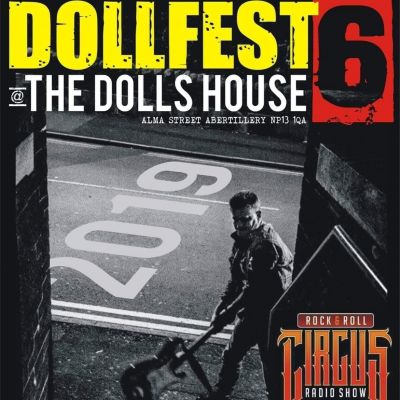 Well, I've just about recovered from the weekend at Dollfest 6. We started to plan this event more than a twelve month ago, and after such a cracking line up in year five, this year was always going to be a challenge.  I think we managed to get some great bands to come to The Dolls House again this year. We had a great night on Friday with some quality Punk rock from Trigger McPoopshute, System Reset, Terminal rage, Face Up & The bitten.

I would like to thank all the bands for agreeing to come and play for us on the weekend. Also I need to thank Andrew, Carl, Craig, Blain and all the staff at The Dolls House, for all their hard work on the weekend and at all our other events throughout the year. Thanks to our team on the weekend, Dan the bucket man, & to the legend Chris Badaxe Heath for keeping everything running smoothly between bands.

As you know, Dollfest is a charity event in which we usually collect for a Cancer Charity. After hearing about our friend Mikey Lawless being diagnosed with cancer, we have chosen to donate the money raised to him. Mikey has played in the past at our charity events with Falling Red, so we thought this time we would try and help him in a small way. Over the weekend we have managed to raise £460.00!. I have rounded it up to £500.00 and I will be donating the money to the gofundme.com fund that has been set up by Dave Sanders as soon as I have banked the money.

We have already announced the dates for Dollfest 7, which will be over the weekend of 25th-26th September 2020. Bands confirmed for the Friday Punk night so far are :- Red Light Syndrome, MC16 & The Bottlekids with two more to be confirmed. Bands confirmed for the Saturday are :-King Voodoo, The Wicked Jackals, The Autumn Killers, Who Knows Didley?, Feral Sun, Witch Tripper, At The Sun, The Philo Beddoe Band.

Lastly, I would like to thank all the people who ventured out in horrendous weather this weekend & for your generous donations. Without your continued support of live music we couldn't do what we do to raise much needed funds for the charities we donate to. From myself & Paul, I thank you for your support of The Rock & Roll Circus.

The next event for The Rock & Roll Circus Events team is our Annual Charity Xmas Bash on 13th-14th December at The Dolls house.