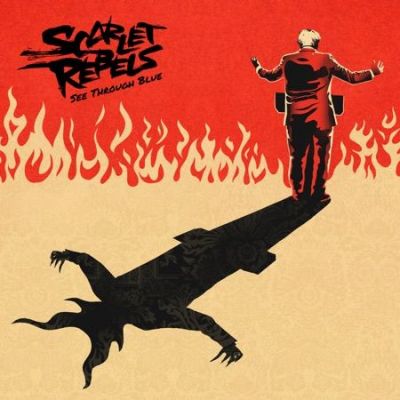 Jono Moulds checks out the latest single from Scarlet Rebels. "London Story" is taken from their forthcoming album, See Through Blues. Due out on 28th January 2022
Via Earache Records.

And so, we check out the brand new single ‘London Story’ by ‘Scarlet Rebels’ which sees an epic, soaring rock riff alongside jagged, punctuated rhythm in this twisted love story. Through the track, frontman Wayne Doyle runs with See Through Blues central theme of not taking everything as it seems, having previously voiced that he believes it’s healthy to question everything.

A searing guitar line, supported by prolonged, overdriven chords and a solid drum pattern welcome us to South Wales ‘Scarlet Rebels’ brand new single ‘London Story’. As Doyle himself explains “‘London Story’ is a love story that holds a dark twist to it – it’s Romeo and Juliet romance set in the cold shadows of wintry London. In the end, Juliet walks free away from the toxicity that Romeo burdened her with, and it’s Romeo who walks into tragedy. It shines an interrogatory spotlight on
toxic relationships. People often show the very best of their relationships online – I always wonder what lies beneath the surface.”

As the opening guitar line completes its task, we move at pace into the opening verse, where there is a change of arrangement/ direction, as for me, there is a hint of ‘Queens of the Stone Age’s’ ‘No one Knows’ coming in at me (sounds great too) as ‘Doyle’ outlines what’s to come by singing ‘Let me tell you a story – it only feels like yesterday’. The vocal (which is strong band raucous – excellent stuff) is delivered over a persistent and punctuated drum pattern, and as already mentioned that, ‘jagged’ guitar combination (hence the reference to QOTS above – you’ll see it, I think?).

The pattern remains in place through the songs initial stages before the arrangement changes once again and we completely lose that ‘jaggedness’ (sorry, best way I can describe it ) as the band start to power through the next phase of the tune with some aplomb. This section is powerful, has a great guitar melody line and some effective backing vocals to give it a superb lift. This rumbles on until we have a bridge that is of the basically the same as the opening of the song.

As we enter another round of verses, there is a subtle, yet noticeable addition of a secondary guitar that’s been added into the mix. This softly sits above the main guitar and adds a well-placed ‘sparkle’ to the verses. As with the first verse, the ‘chorus?’ (I think it’s the chorus) comes straight in after, and
kicks in with great effect.

Around midway through, there is a musical respite, where ‘Doyle’ proclaims, ‘It’s a London Story’ over the top of another guitar lick/run and more of those overdriven chords that easily ring out, all the while, supported by drums crashing in with the guitar, in perfect time.

Things then slowly start to develop as the drums add more of a substantial beat, all before there is some blatant ‘chuggage’. As a prelude to the guitar solo, the opening section to the song is played out once more, but this time, the rhythm patterns behind it change completely, which adds a different flavour and vibe. Love that.

‘Jones’ then carries out his solo duties, which has more of that ‘searing’ tonal quality about it, which is born out of melody, rather than over the top speed.

The song completes itself with another opportunity for the band to belt out the chorus one more time, and so, we end as we began, that is, with the opening guitar line, as the rest crash in all around it.

I’ve loved checking out ‘London Story’. For me, this tune works brilliantly as a single, and certainly has the main attributes required, that is, strong hooks, high on melody and a great story line. The band are hitting all the marks too, as there is obvious strength in both the vocal performances and the technicality of their playing.

The tune has more than enough of a commercial edge to it, but without losing the power of what is, a rock song. That for me ticks all the boxes and I hope that this gets the air time that it deserves. Tidy Darts boys.

Check out the video for "London Story". Taken from their forthcoming album "SEE THROUGH BLUE" Out 28th January 2022 Via EARACHE RECORDS PRE-ORDER HERE