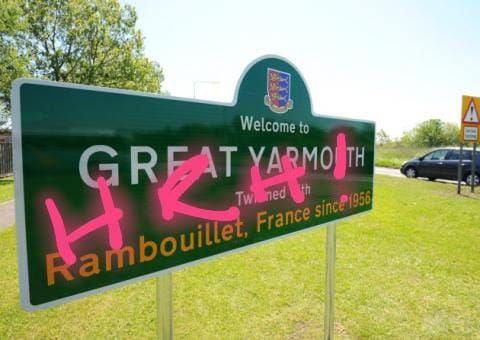 The drive to Great Yarmouth was like kissing your nan when she had a moustache. You didn’t want to, but you also didn’t want to hurt her feelings and miss out on the £10 she gives you every week because she’s a little confused. From Abergavenny, South Wales, Great Yarmouth is around a ﬁve-hour drive. So, imagine the happiness that built internally when my clinically obese backside was still sat in front of a steering wheel seven hours later.

We eventually arrived at the venue (Vauxhall Holiday Park) as the rain battered the windscreen. The accommodation wasn’t too shabby, we threw our bags into the caravan and rushed to the venue to catch REEF featuring Andy Taylor (Former Duran Duran and The Power Station.) We passed two middle-aged gentlemen. “What’s the venue like Barry?” One bloke said. “Tis shit,” Barry replied. Speak as I ﬁnd, I quite liked the venue. I witnessed Beetlejuice kissing a blonde lady on the ﬂoor and a man wearing roller blades. The main stage was an okay size, and the walkway into the audience certainly made you feel a little excited that you may get that little closer to your favourite band. One thing to note, the ceiling in the venue was quite low, which made everything seem smaller. Next year, if we could change the entire structure, that would be great.

Stage 2 had the same impact but without the walkway. It was intimate, sweaty, and you could smell the anticipation of a good weekend ahead. REEF have come along way since their 1997 album ‘Glow’ featuring the single, which I’m sure you're all familiar with ‘Place Your Hands.’ They've been around for some time, taking six years off, respectively, to explore other avenues and raise families. They were the main band to help pull the audience in and keep them there until breakfast at the onsite restaurant on Sunday. They were full of energy, and though some questioned why they were there in the ﬁrst place, you can’t please everyone, and you couldn’t help but tap a foot to Gary Stringers rough vocals and rock/blues melodies. We headed back to the caravan with a cardboard margarita pizza and rested in anticipation of what tomorrow would bring.

On the main stage, we caught the ‘Those Damn Crows’ set. The band from Bridgend, Wales were a ball of energy. Frontman Shane Greenhall used his Welsh wit when he felt a little thirsty. “Who's got a drink?” He said while everyone held up their plastic pint glasses in the hope that he would pick theirs. I held up my archers and lemonade, which didn’t go down too well. And a few giggled around me. “I’ll buy you one later. Cheers!” He said as he took a pint from one of the many hands thrust his way. “You can trust me. I’m Welsh!” The frontman had them eating out of the palm of his hand. Truth be told, if Those Damn Crows were booked on the bill today instead of six months ago, they would be a lot higher. Perhaps even one of the headlining acts. I’m Welsh and was pretty proud to see such a great band nailing it.

I popped over to stage two. The monstrous guitars and angsty vocals of the Birmingham band ‘Y!kes’ greeted me. At ﬁrst, there weren’t many in attendance, but all that changed after a minute or so. Lead singer Oli Long threw himself around the stage and even serenaded a fortunate lady in the front row. While guitarist Liam Howard resembled  Richey Edwards of the Manic Street Preachers in the Holy Bible era. Drummer TJ Weston reminded me of a character from the Inbetweeners, but with attitude and drumming to admire. Bassist Matt Ford’s choice of shirt was questionable. It was a little big and something that I would've worn in 1997 at the local rugby club disco to impress the local village bike. While I admired him as a bassist, I wasn't happy with that shirt. It's petty, I know! The four-piece gave everything, and their unpredictability excited me. Until Long cupped his crotch a few times too many during one song, it turned a little sexual, and for a brief moment, I felt like the guy that sits in the corner during group sex, just to watch. Y!kes played an energetic set, and no doubt, left HRH with a few more fans. This is one band I look forward to seeing again soon.

Brian Downey’s Alive and Dangerous were up. The former Thin Lizzy drummer still hammering away at sixty-eight years old. Lead singer and bassist Matt Wilson’s stage presence is similar to Phil Lynott (Former Thin Lizzy) even in appearance! Not many could pull off such a mustache, but
he does it. Guitarists Phil Edgar and Brian Grace roamed the stage looking to strike a pose for the photographers in the pit. `You get a feeling that this is what the boys from Ireland are supposed to be doing, and the spirit of Thin Lizzy lives on.

It’s eight-thirty and Scottish band ‘Gun’ begin their set. The Glaswegian lineup has changed over the years, but now their more settled than ever. With a new album set to drop on the 29th November, there’s much to look forward to. At one point lead singer Dante Gizzi had to break up a slight scufﬂe near the front of the stage. “Come on now, lads, just make up.” He said in a soothing and understanding voice, almost as if he was a marriage counsellor. If anyone was going to tell me that I was dying, I’d like it to be Dante. Made up, they did, and the show rolled on. Gun perfectly set up the last band of the night, Buckcherry.

As soon as Buckcherry lead singer Josh Todd walked onto the stage, you could see some of the ladies' mouths drop near the front. Hell, at one point, he tested my sexuality. Some may only remember them for one song ‘Crazy Bit*h,’ but they have plenty more in their pocket. Their latest album ‘Warpaint’ was released in March this year, and this was an opportunity to promote it. Later in the set, Todd removed his shirt and exposed his tattooed torso. One lady confessed, “Oh My God!  He makes me tingle!” And the man who I assume was her husband turned and said: “In fairness, he does make her tingle!” That’s love, and that man is a keeper. Buckcherry are Buckcherry. Simple. They’ll entertain you and give you Crazy Bit*h if you so require, but they can’t guarantee the ‘Tingling.’

Tonight we had a large cheese and chips in a cardboard box. While the caravan next door chatted about life, ex’s and who would win a ﬁght Ozzy or Bruce Dickinson (I’d put a ﬁver on Bruce.)

Saturday arrived, and it felt a little chilly as we headed to the site's restaurant to interview Polish rockers ‘Chemia’ (Please see interviews on the Rock and Roll Circus website). Costa coffee was a must and an extra few sugars. A great bunch of guys from Poland who I only discovered after researching them. I have to say I thoroughly enjoyed their set and the interview. Music is in their hearts; they play with freedom and have a plan — they're sticking to it.  We visited Great Yarmouth and bonded with the locals. A word of advice...don’t bother with SEA LIFE. It was costly, and the only fun I had was while the penguins were being fed, one of them (Wearing a green tag) tripped, stumbled, and fell back into the water. Although the hot chocolate in the cafe was splendid, give this a miss. I bought a vagina lollypop from a sweet shop closer to town and took great pleasure in licking it seductively while making eye contact with anyone passing by. Lunch in the locals 'Spoons' was mediocre, and Mcdonalds felt like I was entering gang turf. I only wanted a Maltesers Mcﬂurry. We headed back to interview Michael Monroe and catch Doro's set.

Ah Doro, the Queen of Metal and all-round wonderful woman. She stood us up for an interview after her set. In her defence, the media centre was closed, and we must’ve just missed each other. That said, we received a lovely message, and next time hopefully, it’s happening. What a set from Doro Pesch! Rocking out tunes such as ‘All For Metal’ and ‘The Night of the Warlock’ and even the beginning of ‘From Whom the Bell Tolls’ by Metallica. Towards the end of the set, HRH presented Doro with the ‘Angel of Rock’ award, and it was well deserved. She gracefully accepted and smashed out one more song before ﬁnishing up. One act left, Michael Monroe.

Glyn and I met Michael Monroe a few hours before for an interview (See Rock and Roll Circus website). The former Hanoi Rocks frontman strutted his stuff backed by a band that included former New York Dolls guitarist Steve Conti. This was the perfect way to end the HRH experience. Michael Monroe nailed it and had the audience dancing for two hours. The Fifty-ﬁve-year-old moved like he had the energy of a twenty-year-old. They began with ‘One Man Gang‘ and followed it up with ‘Last Train to Tokyo.’ Seventeen tunes later, including a few covers of Hanoi Rocks, Nazareth, and Creedence Clearwater Revival. Monroe was done and left you satisﬁed and covered in your own and everyone else's sweat. That night we had large cheesy chips with a Margherita cardboard pizza, washed down with copious amounts of honey rum.

Hungover and with our ears still ringing, we headed home with a coffee in hand. A great weekend of music, awesome bands, great company, lots of hair, and Beetlejuice fancy dress costumes. We even saw a life-sized teddy bear. "Am I tripping or did I see a f**king teddy bear over there?!" Those Damn Crows singer Shane Greenhall said. Your not wrong, sir. That was indeed a f**king teddy bear. Bring on 2020!

Highlights of the weekend;
*Discovering acts that I had never heard off.
*The sense of being around friends and enjoying Rock and Roll. *Those Damn Crows
*Doro
*Michael Monroe
*Y!kes
*Chemia
*Seeing how New York band Killcode spent time with their fans in and around the venue. Pretty disappointed to miss their set, but looking forward to seeing them soon.
*Witnessing four big hard rockers trying to win a cuddly toy in the arcades.
*Rock and Roll Circus. Who looked after Glyn and I and sorted out any issues that arose.

Negatives;
*The Seating area near the front of the stage.
*Pit photographers not putting their cameras away after 2 or 3 songs.
*X1 Photographer who was a little pushy, and I had to announce that I would F*** him if he elbowed me again. He backed away, thankfully!
*I expected a slightly bigger stage. But this wasn’t the end of the world. I was more disappointed with the chairs.
*It had nothing to do with HRH, but SEA LIFE was overpriced, and the sharks arrogant. Keep an eye out for the penguin with the green band; he's a funny guy. This was the only occasion that I felt angry over the weekend. Except when driving home and being stuck behind a tractor.
*Me! I wanted to get around so many more bands. Photograph and Interview them.

Would I recommend Hard Rock Hell 2020? Yes! The positives outweigh the negatives. It’s well organised and next year's line up looks even better!