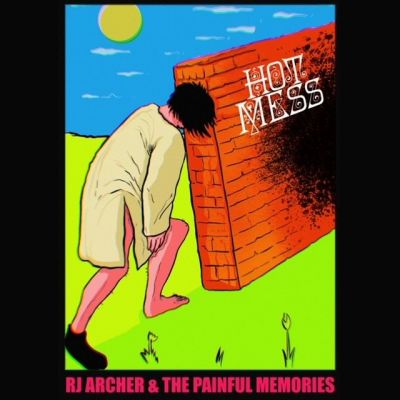 Jono Moulds checks out the debut album from R.J. Archer & the Painful Memories for The Rock & Roll Circus. Due for release on September 24th 2021.

Temporarily thwarted by a pandemic, they have finally finished recording their debut album 'Hot Mess' and released two singles, 'Who Am I Supposed to Love Now' and 'A Little Mercy' through Spotify, Apple and all the usual places between June and July 2021 to a warm response. 'Hot Mess' will be released on September 24th 2021.

So, let’s get this going, and we are up and running with ‘A Little Mercy’. A stripped back, bluesy track that utilises drum, bass and guitar to maximum effect. Verses are covered with solid bass and crunching guitar until a subtle guitar lick takes us into the chorus, which certainly has a ‘Rolling Stones’ edge to it. A catchy opening track that no doubt lays the foundation of what’s to come.

‘It’s Snowing in Hell’ opens up with a side-tom drum type beat before a bass ‘noodle’ (Is that an actual term?? Let’s go for it) and then guitar join the fray. A simple, but effective riff run carries the tune into the verse section until we are met with high fuzz/gain guitar break, before we are back into the main groove. For me, the song has an early ‘Kings of Leon’ feel to it mixed with more of that R&B style.

A change of feel for the next tune ‘Live, Love & Lose’. This has a much more deliberate and heavier guitar sound than those songs that have opened up the album; which is also matched by the slower pace and delivery. Archer showing some ‘Jagger’ inflections here as he sings “bound to end the same’. The word ‘Same’ coming through as ‘Saaayyyum’ midway through the track. Nice touch.

‘Little Universe’ is another up-tempo tune that pays homage to the classic R&B bands of the past. It starts off with a really interesting and solid drum rhythm pattern (which pretty much stays with the song all the way through), which, again to these ears, is akin to a ‘Sympathy for the Devil’ vibe and is accompanied nicely by some solid bass, that support it well throughout. A nice change of pace (and drum beat) toward the end of the song gives it yet another interesting texture. Good tune this.

Look out chaps, ‘That Girl Spells Trouble’ arrives with that ago old warning for all us men (will we ever learn???) Some light & bright guitar kicks things off, before the first verse arrives, ably helped by some well-placed backing vocal (well, there are lots of Argh’s!!!! that are all in the right places). Sliding power chords sweep down the neck of the guitar to help re-enforce just how much trouble this girl is (Actually, it fits the song and the theme perfectly). Another catchy tune that’s over before you know it.

‘Who am I supposed to Love’ bursts open with a twangy guitar riff that fades into the background as Archer comes in with the first verse. Within the first minute or so, there is yet another likeness/similarity to a vocal style adopted on this song, where there are moments when I get reminded of a bit of Chris Robinson from the Black Crowes. The chorus is well supported, vocally, which definitely solidifies it. Also, look out for neat little guitar break between the chorus and the following verse (Beatles-esque there).

Then onto ‘Bad guys Always win’ which quickly kicks into gear, and has another great groove to it that dips in and out of traditional R&B phrasing and licks, mixed up with something a little more conventional in style, which really works well and gives the tune some variety.

‘Hey Girl’ is here in a flash, with its cross blend of Country meets a Nirvana unplugged sound. This has a completely different feel to it. The pace drops and there is distinct laid back on the front porch, with a glass of whiskey, watching the sunset vibe to it, thinking about…………… that girl and just where she might be.

A guitar introduction that great Wilko Johnston would be happy with, ‘In the Wrong’ springs forward with some gusto and energy. There’s a nice blend of clean guitar fused with high fuzz, but always fully supported by the solid the bass and drum combo (I may have mentioned that once or twice, my bad). The guitar lick builds as we climax with a fast crescendo. Strong stuff indeed.

‘Bound to feel Lonely in the End’ is actually the end track and we have the first taste of some good old acoustic. From the get go, there is a strong nod towards the Kinks ‘Sunny Afternoon’ in both the soothing and relaxed guitar playing and the vocal. This may remind me of that tune, but hats off to the boys for producing a top track in which to finish off the album.

So then, 10 songs, all with that 60’s R&B vibe. which are also fused with a more contemporary feel. As stated within my review, for me, they have drawn on plenty of legendary influences, but that’s never a bad thing, what’s the saying/phrase? ‘Standing on the shoulders of giants’ (Using the understanding gained by major thinkers who have gone before in order to make intellectual progress).

But hey, this is just my opinion, best you go check this out for yourself. I’m sure you won’t be disappointed.