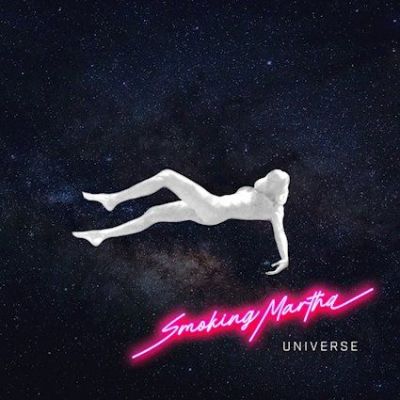 Jono Moulds checks out the new album from Smoking Martha, for The Rock & Roll Circus. The rising diverse Brisbane rock group is set to release its new full-length studio album, 'Universe', this December via Xelon Entertainment.

The ‘Universe’ album begins with ‘Good Girls’, which has ‘Poynter’ straight into action, as the distant sounding drums gives way to a ‘Mick Mars/Mötley Crüe’ style opening guitar riff. It doesn’t take too long though before ‘Tasha ‘D’, announces her arrival with a vocal foray of ‘La, la, la, la, la, la’, before enquiring ‘where all the good girls gone’? The song is pacey, raw and has a unique vibe to it, no more so than ‘D’s’ vocal, which really stands out (a bit punk, a bit rock, but a bit good!!). The track doesn’t outstay its welcome, but this is a great opener.

‘Only Love’ is up next, which opens up with a more traditional sounding guitar riff that leads into a second guitar, harmonising over the top. As much as the opening track had a ‘spikey’ edge to it, this has a much more tried and tested vibe to it, but that’s not to mislead you, as the tune is certainly no filler. The bridge into chorus is instantly likeable, supported by some great guitar runs that sit behind, but are not lost under the vocal. I love ‘D’s’ vocal on this, there is something very distinct about it, with a deepness and edge that fits perfectly. Another top tune.

Snare drum introduces ‘I Tried’, that has some clean guitar to keep it company, as some top guitar rifforama comes out to play as the first verse dissipates and makes way for verse two. Yet again, and for the second song on the bounce, the bridge/chorus is big in sound and really catchy (‘I lost, I lost my mind’ she sings!!!). The song has some clever touches throughout, where drum timings change (as we head into verse three) and there are some very powerful and technical sections that just add to the variety that this song holds in spades. I’ve really liked all three songs so far, but this is class.

Another drum intro, in conjunction with a picked/muted guitar sequence, welcomes in ‘Wonderful Happiness’ which stays with the opening to the track along its journey, that is, until there is a change of tact as the guitar threads together a series of power chords that deliver us toward the chorus (which, to me, has an ‘Alter Bridge’ feel to it). This pattern is repeated up until the mid-section, which brings forth a well-developed guitar solo, that sits across various changes within the song  structure/rhythms, leaving the final third of the track with some seriously interesting diversity.

‘Liquid Sunshine’ (the second single from ‘Universe’), has a powerful intro, that fades into the distance as the we trundle through to the opening, as lightly played guitar, crisp bass lines and a solid drum beat assist the initial vocal. It soon picks up pace, as we head through the bridge, all in readiness for the chorus, which has an immediate hook to it (as any good single should have. And this doesn’t disappoint). There are some great song-writing touches built into the song, no more so than pre-guitar break, where vocal theatrics combine with the band to herald in the solo. You can easily see why they chose this track as a single. Excellent tuneage!!!!

A complete change of vibe on ‘Intermission’ as a bluesy tone guitar and a lone, smoky, slightly distorted vocal sets the mood. Imagine if you will, a small, smoke-filled gin joint, as a single spotlight is despatched to a darkened stage, where the silhouette of a guitar player can just be made out, standing next to a sultry lady, singing into a microphone, eyes closed (I got carried away a bit there, sorry ). As soon as you hear this tune, just remember this description. Hopefully, it will then make sense. A big departure on what’s come and gone so far, but variety is the spice of life.

Palm muted guitar strumming, along with a drum beat that has the consistent timing and rhythm of a train rumbling down a long, straight track and we have arrived at the platform of ‘Neon Lights’. The song, as with the last, shows another side to the band, as the vibe is a lot softer, and is adorned with picked acoustic guitar, haunting vocal and that snare rhythm, which never drops a beat. A short tune, but certainly leaves an impression. Speaking of ‘haunting’, up next is ‘Ghost’ and we are back to that faster paced, heavier sound that we came accustom to at the start of the album. Guitar is the prominent force from the off, as an almost ‘Message in a bottle’ style, picked note/chord pattern is played, while a lead break is heard over the top, as we land at the opening verse. The chorus is sung over the opening guitar pattern, as ‘D’ sings ‘Enough, enough, enough’, which locks you in, as it repeats and will certainly grab your attention. There is respite halfway through, where there are swathes of guitar, bass and drums, all this as it builds back up toward a chorus outro. Another top track.

‘It’s a Lie’ hits the speakers, with a ‘Spaghetti Western’ type guitar sound, but is quickly overtaken by the band cranking it up several notches with some big riffage!!!! (The intro reminds me of something ‘Rival Sons’ would have written – Cool). ‘Broome’s’ distorted Bass guitar riff tags along with ‘Poynter’s’ drums through the opening verse, until the guitars decide they’ve been left out in the cold far too long, and join in to add some extra weight. The chorus is strong and heavy as ‘D’ sings a salvo of ‘It’s a lie, it’s a lie, it’s a lie, it’s a lie’. Just when you think the song structure is set, then the course/direction within final third has some really interesting changes, as first, the guitar rolls off the gain and the power and vibe is tamed, then, it comes back to life with a staggered and driven outro.

‘D’ fires up ‘In the Shadows’, as an almost, but not quite ‘Kashmir’ guitar chord sequence takes control, before things settle down, as we enter the opening verse ‘My heart beats slowly, they try to save me’. A short and progressive bridge allows us access to the chorus, that is both crunching and
memorable. ‘We are!!!!’, ‘We are one!!!’ is sung over the mid-section, before we head to another chorus. ‘Wild & Free’ gives us more ‘rifforma’, as we start off at some serious pace, all before it relaxes through the initial stages of the tune. ‘She spent her love singing blues on the road’ gives you an idea of what the track is all about. The chorus is sung over the opening riff, as the vocals take the ‘Rock-meter’ up a notch. I can easily see this as being a great song to play live and a real crowd pleaser. Top rocking!!!!

And it came to pass, that the enormity of the ‘Universe’ directs us to the exit of the album. The self-titled, acoustic led tune, yet again shows us just how diverse the band are with their writing skills. This has a great melody and is instantly pleasing on the ear. ‘D’s voice, which as standard, has a haunting quality to it, brings even more dynamic to the song and that ‘haunting’ vibe is accentuated, in tandem with the song feel. This is an emotional and classy way to finish off a record that has really
impressed me.

OK. How do I sum this up? As a whole, the album delivers big time!! The songs, production, band are all right up there. ‘D’s vocal shines and has unique qualities and a flexibility which not only fit with the vibe of each tune on this record (from punky vibes through to blues), but lifts each one to a higher level. I for one, love her vocal and this album should get the exposure its fully deserves. I’ve loved it.